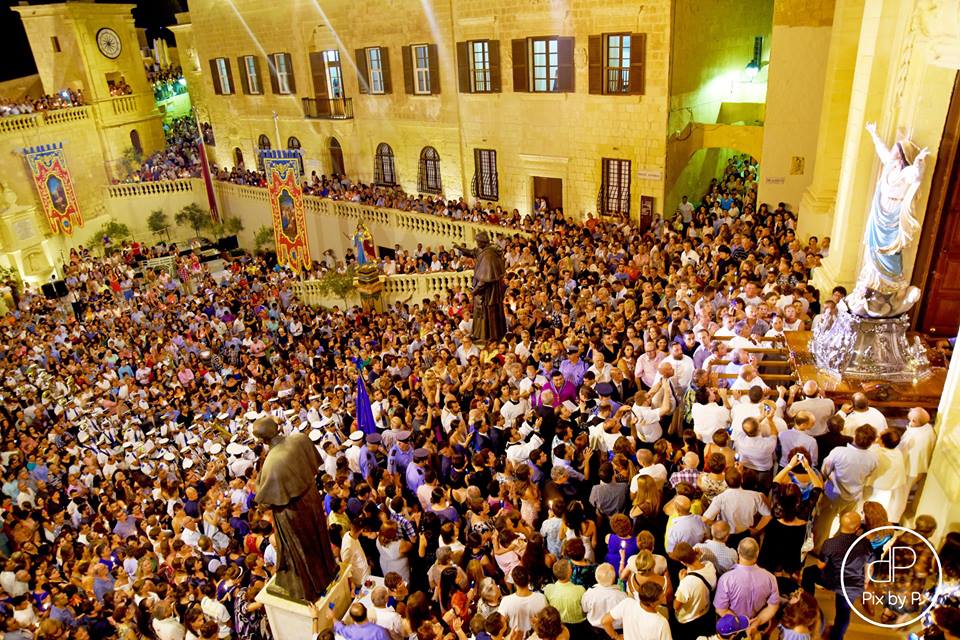 9:00pm         Leone Band in concert | Festa edition: open-air concert by the Leone Band featuring classical, symphonic and mixed-genre music including the much-sought cantata in honour of Our Lady ‘Per La Festa Di Maria Assunta In Cielo’ (1913). Seat reservations are strongly recommended – (+356) 99130694 or info@leone.org.mt. 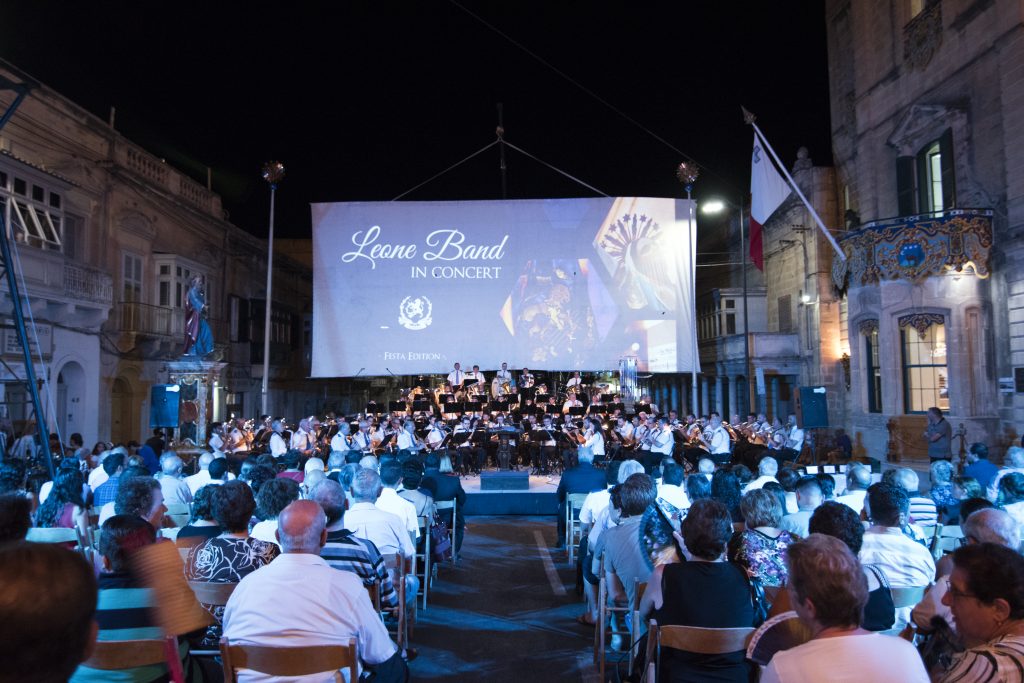 6:45pm         Sung solemn vespers and mass in which the church orchestra and choir perform some of the oldest dated music on the island. 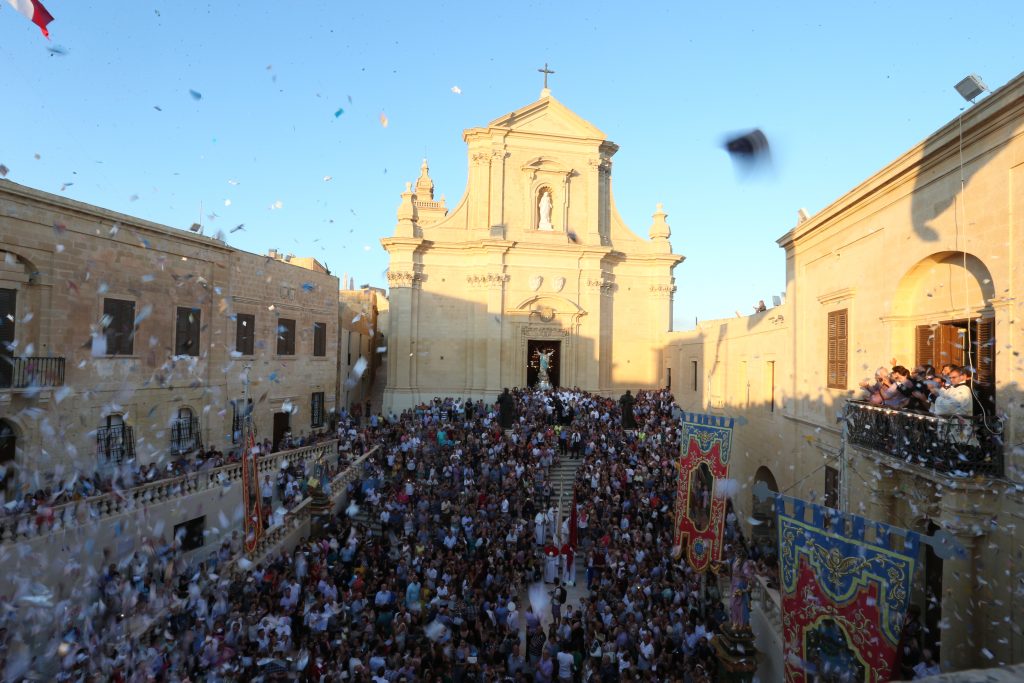 9:30pm         The Leone Band parades the Santa Marija statue (2008) from the Sanctuary of Our Lady of Divine Grace all the way up to the Leone Band Club in Republic Street. The evening ends as the statue ascends on the monumental plinth to popular marches and ground-fireworks (Catherine Wheels) at midnight.

9:30pm        Popular band march by the Leone Band (Victoria) and Beland Band (Żejtun) departing Savina Square towards St Ursola Street. Reveling youths party all the way through Republic Street. The evening ends with a street party in front of the Leone Band Club with an audio-visual show with fireworks at midnight. 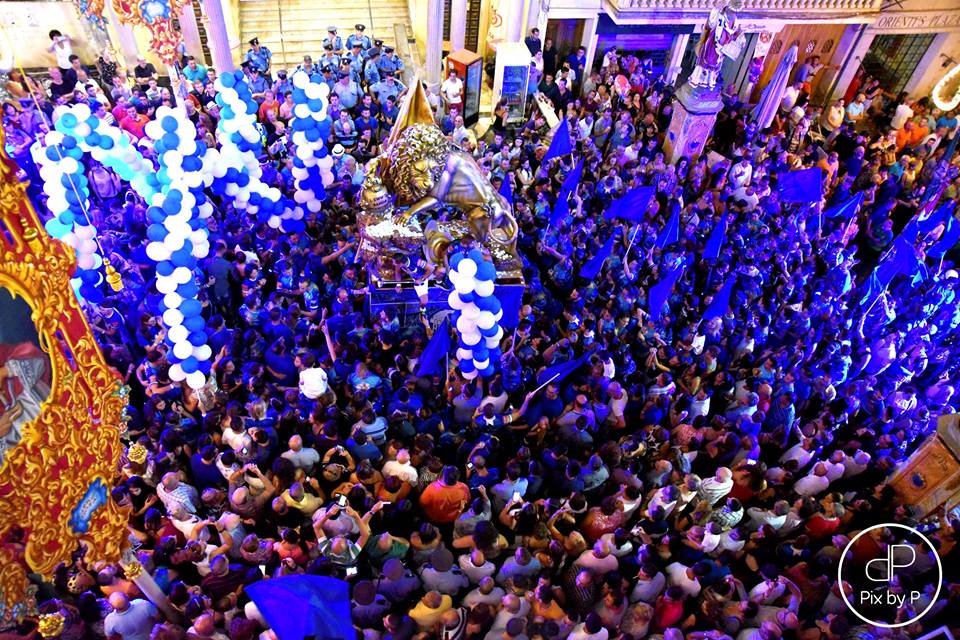 9:30pm         The Leone Band (Victoria) and the Santa Marija Band (Żebbuġ) march along the streets of the historic centre of Victoria as a Santa Marija statue (1956) is carried shoulder high. Meanwhile, St Laurence Band (Birgu, Malta) and St Gregory Band (Kerċem) perform band marches in Republic Street and Independence Square. The evening ends as the statue ascends on the grand plinth to popular marches and spectaculare fireworks at midnight in the city’s main square. 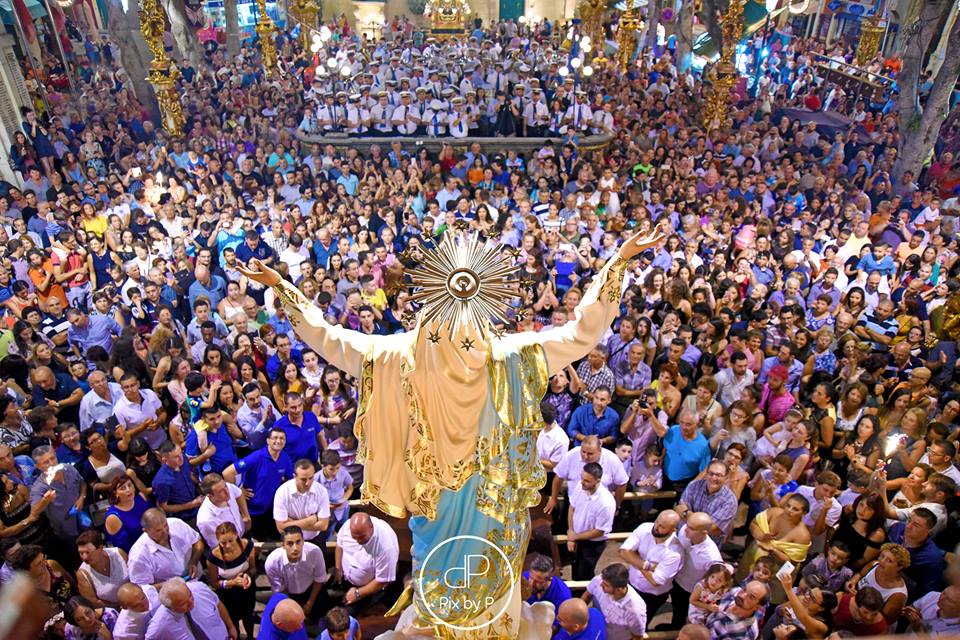 5:30pm         Band march by the Leone Band from the main square to the Gozo Ċittadella as a spectacle of daylight fireworks is let off from Gelmus Hill.

9:30pm        A grand triumphal march by the Leone Band (Victoria) and St Sebastian Band (Qormi) as thousands of revelers party from the Leone Band Club and along Republic Street with traditional and festive chants ending in Sabina Square. Spectacular firework shows open and close the evening after midnight. 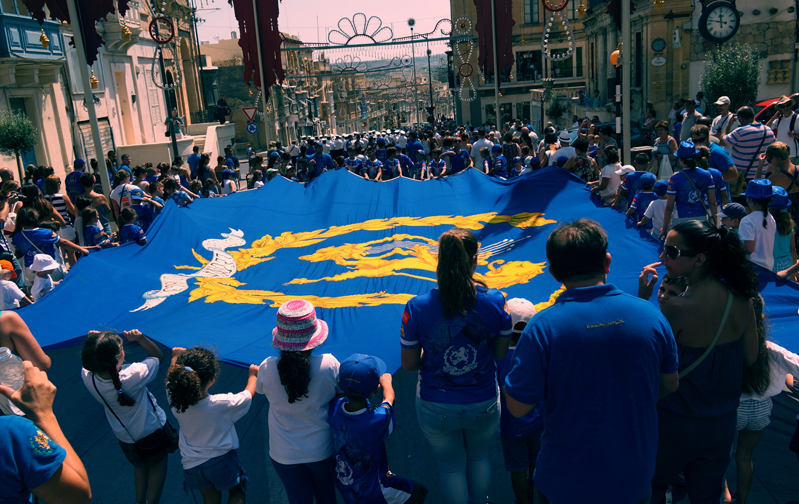 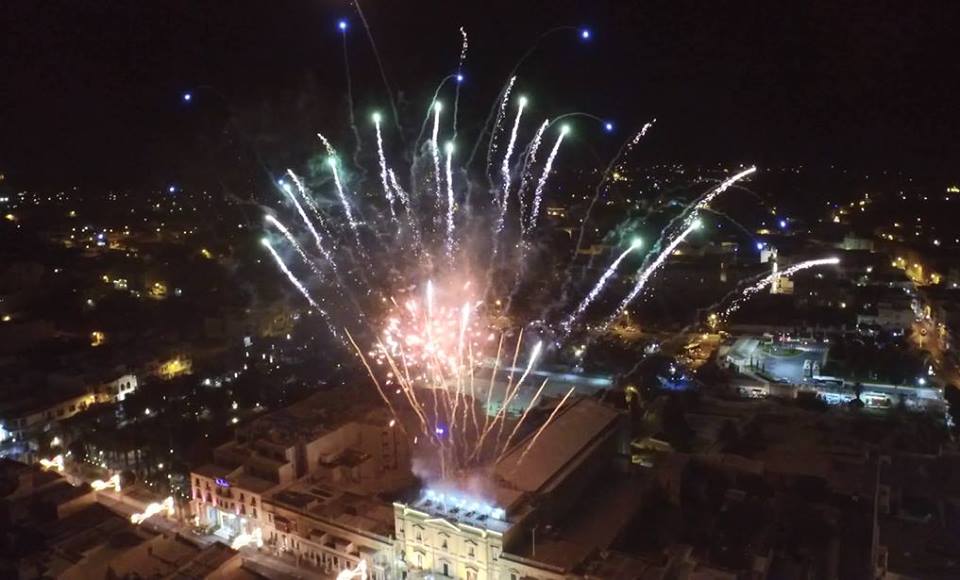 Throughout the day, the traditional Santa Marija agricultural fair is open for thousands of visitors at the Villa Rundle public gardens in lower Republic Street.

9:00am       Solemn high mass presided by H.E. the Gozo Bishop at the Gozo Cathedral with the participation of choir and orchestra

11:00am     Traditional and popular band march in the historic centre of Victoria, starting and departing in the city’s main square. 12th May (Ħaż-Żebbuġ) and St Joseph (Hal-Ghaxaq) bands shall participate. 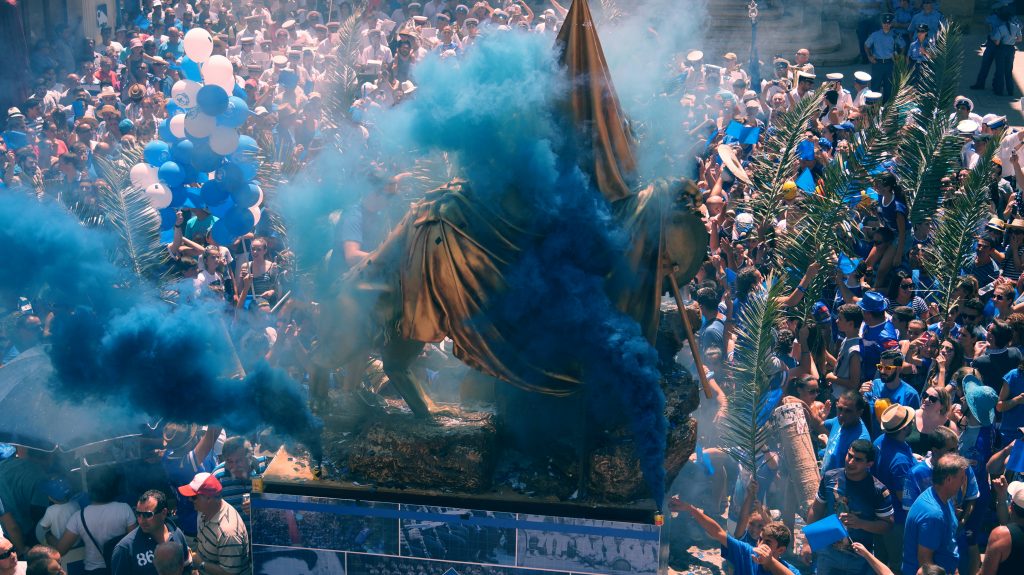 2:30pm       National street horse races in Republic Street which, to date, is known by one and all as racecourse street. 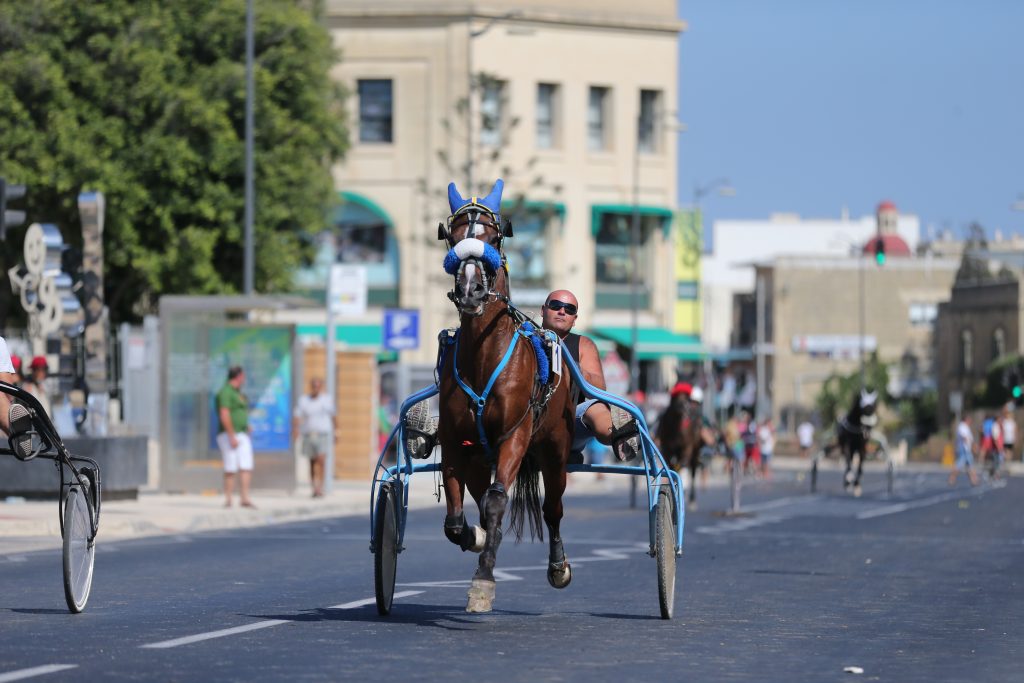 6:45pm       Solemn procession with the Santa Marija statue (1896). The Leone Band performs the much-acclaimed cantata in honour of Our Lady “Per La Festa Di Maria Assunta In Cielo” (1913) in an emotional start of the procession which makes its way through the old streets of the city’s historic centre. Spectacular coloured fireworks are let off during the 4-hour procession during which the Leone Band performs. The Victory Band (Xaghra) and St Joseph Band (Ghajnsielem) play marches and musical programmes in Independence Square and Cathedral Square respectively

9:00pm      The Santa Marija statue is welcomed in lower Palm Street by the Franciscan Nuns who sing a cappella the Salve Regina in Gregorian plainchant from the terraces of their monastery. Thousands of people join to witness the devotional scene of the procession before it starts its way up towards the Gozo Ċittadella.

10:30pm    Solemn entrance of the Santa Marija statue inside the Gozo Cathedral with an aux flambaux gathering in the Ċittadella’s main square and access road. 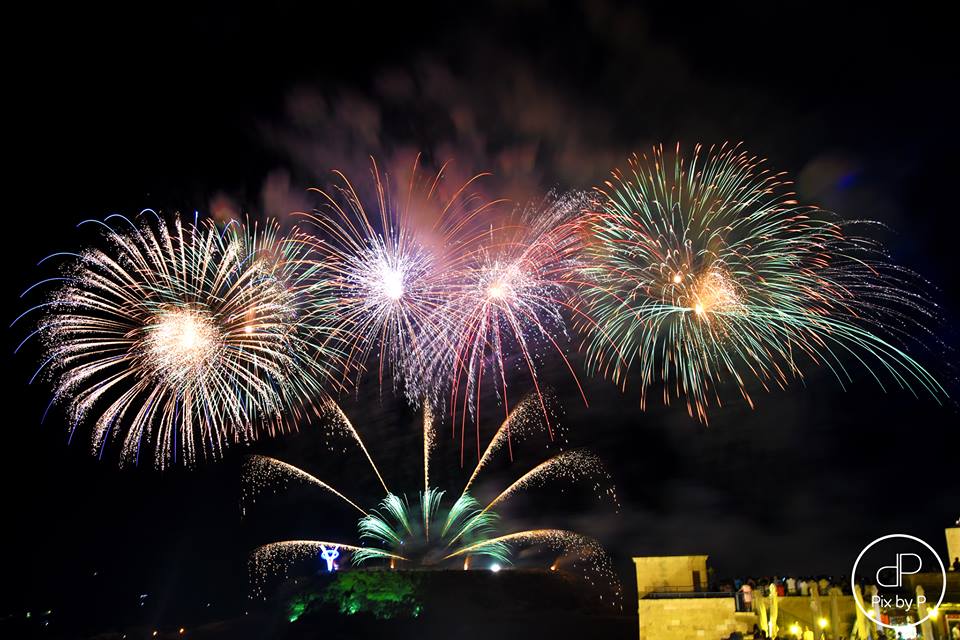